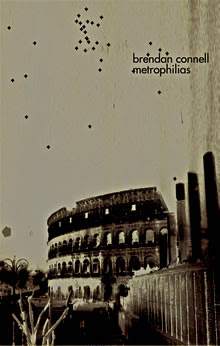 Thirty-six cities. Thirty-six stories of obsession. From ancient Thebes to present day Berlin, Brendan Connell's little portraits of humans superimposed on their suburban environment are corroding treats thrown together in a past-modern beaker, landmark tales of darkness and love in the metropolis.

“With delicate minimalism and poignant specificity, Metrophilias demonstrates the human contagions that come with our increasingly urban life.” —Lucius Shepard, author of Life During Wartime

Brendan Connell was born in Santa Fe, New Mexico, in 1970. He has had fiction published in numerous places, including McSweeney’s, Adbusters, Fast Ships, Black Sails, and the World Fantasy Award winning anthologies Leviathan 3 (The Ministry of Whimsy, 2002), and Strange Tales (Tartarus Press, 2003). His published books are: The Translation of Father Torturo (Prime Books, 2005), Dr. Black and the Guerrillia (Grafitisk Press, 2005), and Metrophilias (Better Non Sequitur, 2010). His forthcoming books are: Unpleasant Tales (Eibonvale Press, 2010), The Architect (PS Publishing, 2011), and The Metanatural Adventures of Dr. Black (PS Publishing, 2012).

About Better Non Sequitur
Better Non Sequitur publishes independent media of towering quality and is located in San Diego, CA, and is known in intimate circles for its previous editions of See You Next Tuesday, as well as other underground fictions: The Producer, The Famous & The Anonymous, Incidents of Egotourism in the Temporary World, and the short film Rubix Cube Dinner.
Eingestellt von Dorothee um 6/11/2010