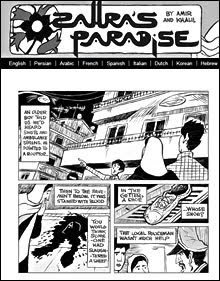 So a Persian writer, an Arab artist and a Jewish editor walk into a room… Sounds like the beginning of a bad joke. Actually, that’s something like the start of this unusual editorial adventure, the first of its kind. Zahra's Paradise is an online, serial webcomic in various languages: English, Farsi, Arabic, French, Italian, Spanish, Hebrew and more. It is published by First Second books in cooperation with Casterman in French and Dutch, Rizzoli Lizard in Italian, and Norma Editorial in Spanish.

Zahra’s Paradise weaves together a composite of real people and events: Set in the aftermath of Iran’s fraudulent elections of 2009, this webcomic tells the fictional story of the search for Mehdi, a young protestor who has disappeared in the Islamic Republic’s gulags. Mehdi has vanished in an extrajudicial twilight zone where habeas corpus is suspended. What stops his memory from being obliterated is not the law. It is the grit and guts of a mother who refuses to surrender her son to fate and the tenacity of a brother—a blogger—who fuses culture and technology to explore and explode absence: the void in which Mehdi has vanished.

author Amir + artist Kahlil
The author Amir is an Iranian-American human rights activist, journalist and documentary filmmaker. He has lived and worked in the United States, Canada, Europe and Afghanistan. His essays and articles have appeared far and wide in the press. Khalil’s work as a fine artist has been much praised. He sculpts and creates ceramics and has been cartooning since he was very young. Zahra’s Paradise is his first graphic novel. The authors have chosen anonymity for obvious political reasons.