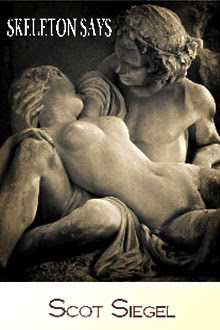 “In Scot Siegel’s Skeleton Says, the twin voices of ‘I’ and ‘Skeleton’ reverberate one man’s experience of aging in a world not unlike Yeats’s ‘rag and bone shop of the heart.’ Here, father, lover, body, and ghost give way to the inevitable specter of all life. Like a west coast Robert Frost, Siegel reveals the marrow of nature and self.” ~ Catherine Kasper, Creative Writing Program Director, University of Texas at San Antonio

Scot Siegel lives in Oregon with his wife and two daughters. A Pushcart nominee, he edits Untitled Country Review, and is the author of two previous volumes of poetry Some Weather (Plain View Press 2008) and the chapbook Untitled Country (Pudding House Publications 2009). A second full-length collection is due out from Salmon Poetry in early 2012.

About Finishing Line Press
Finishing Line Press is an award-winning small press publisher of poetry chapbooks located in Georgetown, Kentucky, USA. The press maintains an extensive online bookstore and most of their books are available on amazon.com.