Frankfurt Book Fair is on - it's one of the largest and oldest book fairs, a meeting point for over 7300 exhibitors from more than 100 countries, with a tradition that spans more than 500 years. The first 3 days of the fair are business days, the weekend is for the general public. 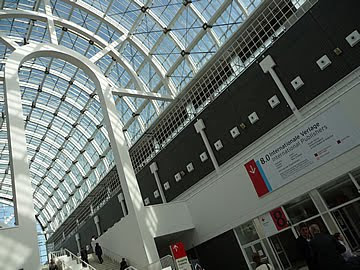 Galleria: the northern entry of the book fair, which directly leads to the halls of the International Publishers 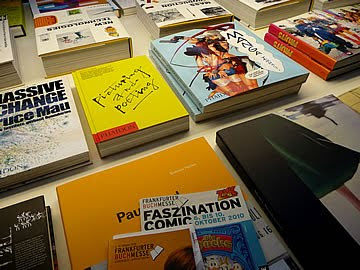 technology + change: even though most books presented are print books, a lot of the forum discussions are about e-books. didn't notice it when i took the picture, but it's a collage of some of the main themes: print books, "picturing + poeting" (the yellow book), and next to it: “Massive Change” – and beyond it, upside down: "New Technologies". 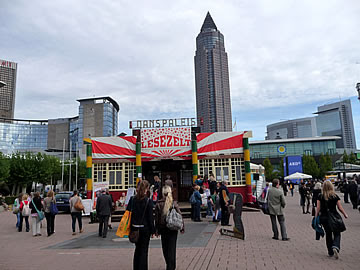 contrast of eras: the fair central plaza with the circus-style"Lesezelt" (reading tent) - and in the background, the modern "MesseTurm" (FairTower) with company offices. 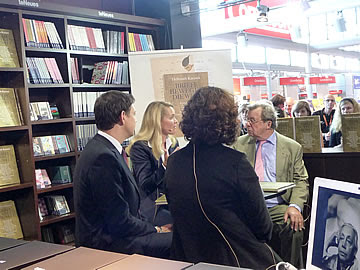 German books + authors: Helmut Karasek with his new book (on historic letters), interviewed at a publisher's book stall. more on current german's books, in an essay from The Millions: The View from Germany by Garth Risk Hallberg, who noted: "On the eve of the Frankfurt Book Fair, it's striking evidence of a literary trade imbalance that so many American books should be prominent in German buchhandlungs when so few German writers are available in English at all." 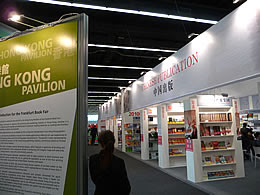 going Asia: the Hong Kong Pavillon and a large group presentation of Chinese publishers - China was last year's (controversial) guest of honour. next year's guest will be: Iceland. 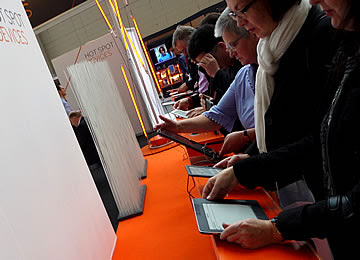 e-books: this year's unofficial controversial guest of honour: e-readers and e-books. below, one of the many presentations / expert talks on the theme - more in the book fair newsletter: "Digital heads discuss the e-book market and the challenges that face us all" 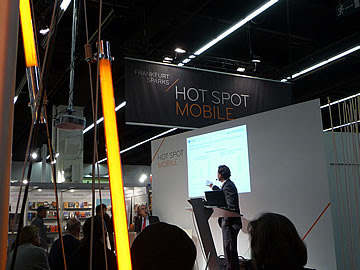 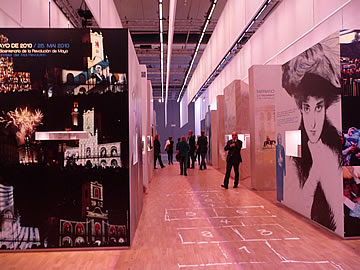 Argentina is this year's guest of honour, with a special pavillon. The pavillon is designed in a labyrinth-like architecture that invites the visitor to explore both the history and the literature of Argentina. 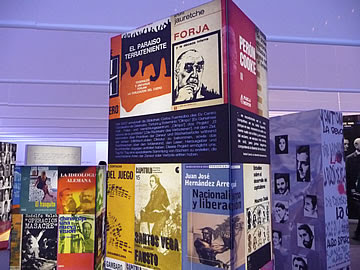 To discover new literary talents and enable publication in as many languages as possible, the Argentinian Foreign Ministry has launched a programme for the support of translations: 100 titles by Argentinian authors were translated into german in 2010. More: Literature on the Move: Argentina at the Book Fair 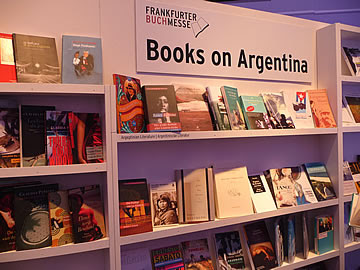 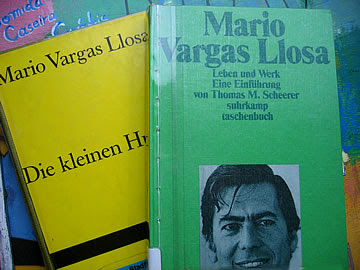 Vargas Llosa is the first South American winner of the prize since 30 years - in 1982, the prize went to his favourite rival - Colombian Gabriel Garcia Marquez (more: BBC article with a note on Marquez / official Nobel webpage).

Nobel Flashback: last year's laureat was Herta Müller, a german author of prose and poetry whose writing is inspired by her life in Romania under Ceausescu's totalitarian regime. She received the prize for being an author "who, with the concentration of poetry and the frankness of prose, depicts the landscape of the dispossessed".
more: the wiki list of laureats with all previous prize laureats, and here a virtual note on Herta Müller's book "Always, the fox was the hunter" + a discussion on persecuted writers. & following the theme of discussion + rivalry, a facebook thread: "But it's now been 14 years since a poet won the Nobel Prize.." 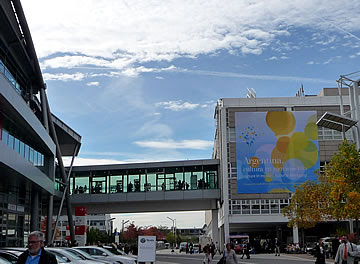 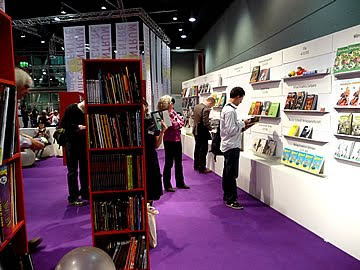 themes: halls and floor levels are dedicated to themes: fiction and non-fiction, children's books, internationl publishers, academic publishers; added to that, there are special areas, for example the "Comic Centre" 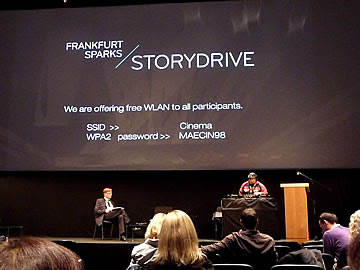 hot spots: the fair also includes hotspots, for example: "Storydrive": a meeting place for the international media and entertainment world, with an own conference program. photo: "Everything Free: Losing Control of Content" with Charles Glenn (aka Afrika Islam / Dr. Charlie Funk), who played a mashup of music first. 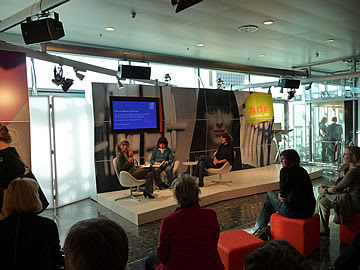 media: many tv and radio stations report live from the fair, for example the multi-lingual german/french culture channel "arte tv", founded 1991 to enhance the relationship between France and Germany: "ARTE is a European cultural television channel. Its originality lays in the fact that it targets audiences from different cultural backgrounds, in particular French and German." (more). + the fair press department runs photo pages: Day 1 / Day 2 / Day 3 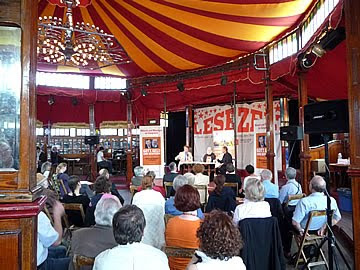 money and values: as ending note, a moment from inside the reading tent: a live discussion on money and values, with a benedict monch, and the manager of puma (in an unusual collaboration, the two of them wrote a book on this theme)