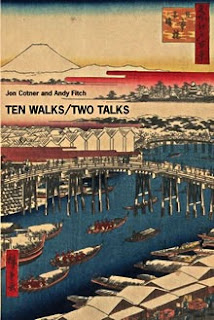 Ten Walks/Two Talks combines a series of sixty-minute, sixty-sentence walks around Manhattan with a pair of roving dialogues—one of which takes place during a late-night "philosophical" ramble through Central Park. Mapping 21st-century New York, Cotner and Fitch update the meandering and meditative form of Basho's travel diaries to construct a descriptive/dialogic fugue.

Jon Cotner and Andy Fitch have performed their dialogic improvisations across the country and internationally. They recently completed another collaborative manuscript called Conversations over Stolen Food. The audio magazine textsound (which is worth a visit itself) features 8+ hours of their solo and collaborative work in a special issue: Improvisations 2006-2010.

About Ugly Duckling Presse
Created by a group of artists and writers without commercial publishing experience, Ugly Duckling Presse has a unique publishing structure with a non-hierarchical editorial collective at its heart. Growing out of the Ugly Duckling zine of the early 1990s, and incorporated as a not-for-profit art & publishing collective in 2002, UDP produces small to mid-size editions of new poetry, translations, lost works, and artist’s books, averaging more than 25 titles a year. The Presse favors emerging, international, and “forgotten” writers with well-defined formal or conceptual projects that are difficult to place at other presses