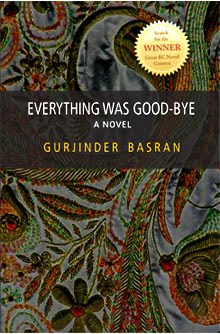 Everything Was Good-bye centers around Meena, a young Indo Canadian woman growing up in the lower mainland of British Columbia and traces her life as she struggles to assert her independence in a Punjabi community. Raised by her tradition bound widowed mother, Meena knows the freedoms of her Canadian peers can never be hers, but unlike her sisters, she is reluctant to submit to a life that is defined by a suitable marriage. Though a narrative moving between race and culture, it is ultimately a story of love, loss and self acceptance amidst shifting cultural ideals.

This novel won the Search for the Great B.C. Novel Contest, chosen from sixty-four manuscripts by Jack Hodgins, who described it as "a fascinating story, skillfully written, of a rebellious young woman's remarkable courage.”

Gurjinder Basran studied creative writing at Simon Fraser University and The Banff Center for the Arts. Her work was shortlisted for the 2008 Amazon Breakthrough Novel Award and earned her a place in the Vancouver Sun’s annual speculative arts and culture article, “Ones To Watch.” A 2006 graduate of Simon Fraser University’s award-winning Writer’s Studio, Gurjinder has read her work at the Vancouver International Writers Festival and has been both a panelist and facilitator on writing at the 2007 Writer’s Studio alumni symposium. She lives in Delta, British Columbia with her husband and two sons. This is her first novel.