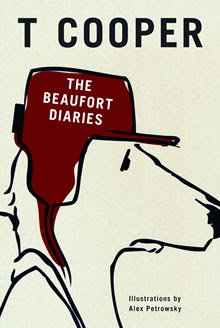 The graphic novel The Beaufort Diaries tells the inspiring story of a polar bear who escapes extinction by going Hollywood. It may sound like a familiar story - boy goes to Hollywood, boy befriends big star, boy gets almost as famous as big star, boy finds fame tricky - but The Beaufort Diaries are subversively different. For one thing, the “boy” is a polar bear. For another thing, the “big star” is Leonardo DiCaprio. And together, they decide to make an action movie… about the environment.

The graphic novel is a collaboration between T. Cooper (story) and Alex Petrowsky (illustration). The illustrations are poster-like, full color images, sample pages are up on Petrowsky's Beaufort webpage, click the cover to open the illustrated pages), and just beyond the book is a book video that features Beaufort, and a story text excerpt is online in the Outlet: From “The Beaufort Diaries” by T. Cooper.

T. Cooper is also the author of two regular old novels, Lipshitz Six, or Two Angry Blondes and Some of the Parts, as well as co-editor of an anthology of short stories entitled A Fictional History of the United States with Huge Chunks Missing. He lives in New York with his family.

Alex Petrowsky is an enterpeneur, a nomad, an artist, an illustrator - for more of his projects, visit his webpage.

About Melville House PublishingMelville House is an independent publishing house born out of the book blog MobyLives and founded in Hoboken, New Jersey, which is also known as the Left Bank of New York City, and which is where Marlon Brando said to Eve Marie Saint (in "On the Waterfront," which was shot in Hoboken), "Come on, I'll walk you home. There are a lot of guys around here with only one thing on their mind." As it turns out, what's on the mind of a lot of those men -- and local women, too -- is good, solid literature, especially literary fiction, non-fiction and poetry. In an amazing coincidence, this is exactly what Melville House provides.
Eingestellt von 2028 um 10/12/2010