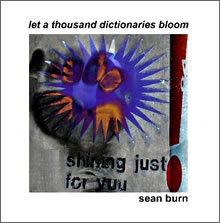 Sean Burn: "i was recently artist-activist with the stanley picker gallery and live art development agency, one of seven residencies under the collective banner louder than bombs. my week focused on anti-racism and central with a durational performance napalm perceptible : a dictionary for the bnp - redactin 'non-indigenous' words to leave a blank dictionary. like each ov us, language is ovcourse outta everywhere. a series ov interviews on identity, race, struggle alternatin with speeches from angela davis and nelson mandela played while challenges to some tabloid headlines and other visual poetry wz also on show. walls were written up in charcoal and reverse graffiti'd with putty rubbers to provide poetic responses to the vocabularies ov hate - this included let a thousand dictionaries bloom."

Sean Burn is a writer, performer and outsider artist with a growing international reputation. He is also actively involved nationally in disability arts. He was shortlisted for a dadafest disability arts award 2009 and is currently outside in artist in residence to the new gallery walsall in association with dash (disability arts shropshire). his twenty five poetry films have received many screenings worldwide, as well as at tate modern and national film theatre studios, london.

Stanley Picker Gallery: Louder Than Bombs
Over the course of seven weeks, the Stanley Picker Gallery handed over its entire exhibition space to host a series of week-long Live Art residencies. Co-curated with the Live Art Development Agency, London, through an open call for proposals, “Louder than Bombs”: Art, Action & Activism was an ambitious programme of public workshops and live events that focussed on challenging social, political and global issues of the day, addressed through the seven invited artist/activist’s individual working practices and the Gallery audience’s direct participation and responding involvement.