#VSS Anthology Volume 01 (Made in DNA) 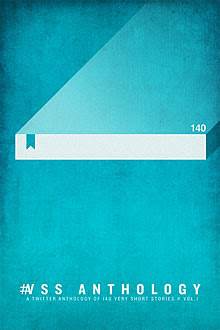 Everyday hundreds of 140-character (or less) stories are posted to Twitter. This is a collection of just a few. # is a hashtag—an identifying marker—allowing users on social networking services to separate out and/or convey certain messages to other users utilizing the same markers. 'VSS' stands for 'very short story'. The #VSS Anthology Volume 1 contains over 150 stories by 37 authors.

"More than anything else, these pieces demonstrate that obstruction can spur creativity. In this case, there's something liberating about being forced to stay under 140 characters." - Moxie Mezcal

The 37 authors featured in the ebook come from many parts of the world and different walks of life, but they all met on Twitter and shared fiction. Some of the authors included: Allan Revich, Toronto (Digitalsalon); Deepti Lamba, Bangalore (deeptilamba); CharlieClose, Grand Blanc (CharlieClose); hyperjapan, Japan (hyperjapan); blpawelek, California (blpawelek); Helene Kwong, SF (hkwong), and many others - for more #vvs reads, try the hashtag-link in twitter: #vss.

About Made in DNA
The editor Made in DNA is an American short story author who is living in Japan, and an author like the 37 authors featured in this ebook. As Twitter users are scattered across the globe, he wanted a small place where a little bit of a lot of folks' work could be enjoyed.