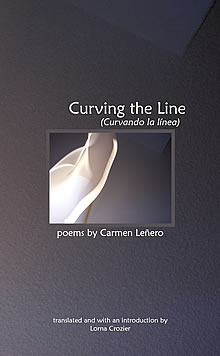 Curving the Line / Curvando la línea is the latest result of what has become a joyful exchange of poetry and language between two poets: Carmen Leñero and Lorna Crozier.

Their relationship began when Carmen, having been introduced to Lorna’s poetry through a friend, decided to translate some of them into Spanish and to set them to music. The result, in 2009, was La Perspectiva del Gato, published by Trilce Ediciones in Mexico City. With it came a CD of the songs. Curving the Line is Lorna’s translation of several of Carmen’s long poems, all of them previously published in Mexico.

Lorna says: “During her work on my poems, she and I corresponded, visited in her house in Mexico City and in mine on Vancouver Island. We stayed up late at night in my garden drinking wine, reading the poems out loud, and falling in love with each other and with the exactitude and magic of translation … What I so admire about her poems–their luminosity, their philosophical insights manifested through the senses, their elegance, their aphoristic wit–I pray the reader will find here.”

Mexican singer and writer Carmen Leñero has published twenty books in various genres. Her poetry, fiction and essays have won several literary awards and grants, including the 1998 Nacional Poetry Award Carlos Pellicer, and she has long been a member of the prestigious Sistema National de Creadores de Arte of the Mexican Ministry of Culture (CONACULTA).

Lorna Crozier is a Canadian poet. A Distinguished Professor at the University of Victoria, she is the recipient of several awards for poetry, including the Governor-General’s, and two honorary doctorates for her contributions to Canadian literature. In 2009 Trilce Ediciones in Mexico City published a collection of her poems translated into Spanish by Carmen Leñero. Her latest book is the memoir: "Small Beneath the Sky."

About Leaf Press
Leaf Press is an independent poetry publisher located on Vancouver Island, British Columbia. Other titles include: Falling Season by Beth Kope, My Nature by Christine Lowther and Flesh in the Inkwell by Winona Baker (previously featured in s-press here.)

editor's note: there is an additional, more personal review of "Curving the Line" up in the editor's blog: "weekend reads"
Eingestellt von Dorothee um 1/13/2011