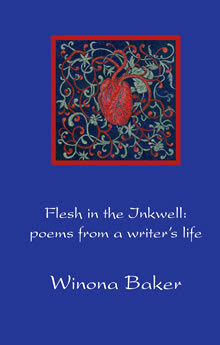 The poems of Flesh in the Inkwell detail what it was like for a child growing up in the ‘29 depression. How sometimes when poverty enters the door, love flies out the window.

Winona Baker’s fascination with words and writing started very early: “On the farm we all went to the crossroads where every two weeks everyone gathered early to gossip, even the children. We waited for a van with drop-down sides to pull up. Stacked behind them was a selection of books. Heavenly! We could take two out every two weeks. It doesn’t sound like many for a budding bibliophile but in a big family that was quite a number. No TV then, but we had a radio, if the batteries weren’t dead.”

Winona Baker published her first poem when she was eleven years old. During a writing career that has spanned a lifetime, her poems have been published all over the world and translated into six languages; she has also received many international honours and awards. Flesh in the Inkwell is her autobiography in verse.

Winona Baker’s work is in more than seventy anthologies worldwide, and has been translated into Japanese, French, Greek, Croatian, Romanian, Yugoslavian. Her work is archived in the Haiku Museum, Tokyo; the Basho Museum, Yamagata; the American Haiku Archives in California, and the Haiku Collection in the Fraser-Hickson Library Montreal. Her other books include Beyond the Lighthouse (Oolichan, 1992) and Even a Stone Breathes (Oolichan, 2000).