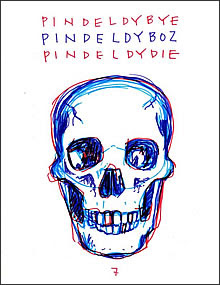 In December 2007, Pindeldyboz published their final print issue. The issue includes the kind of stories Pindeldyboz gave a home for 10 years: stories that defy classification. It includes ten stories and some essays, and starts with a note from the print editor Kristin McGonigle: ".. Read it any way you like. Go crazy with it. Print it out and give it to everyone you know as gifts. Sit at your desk and lament what once was. It’s a bold issue full of weirdness, fun, lies and truths."

The print issue is now up in the web as free download. Together with a goodbye-note from Whitney Pastorek, the executive editor of Pindeldyboz:

"In celebration of our 10th anniversary, Pindeldyboz will be shutting itself down sometime in the next month or so. Yes, it is very sad. Except for how it's not. Please read our news page for more information, and then join us in cracking open a window and feeling the cold, fresh breath of the future on your face. Refreshing, no? And extra useful for drying tears."

About Pindeldyboz
"Pindeldyboz is an operation run by a small but valiant group of people. We publish creative works here on our website and we used to release a print volume once a year. We have been known to publish much fiction, some nonfiction, and artwork makes an irregular appearance. We released our first and only poetry collection in 2007. The Web Edition of Pindeldyboz has published over 1200 stories by more than 600 authors over the last seven years."