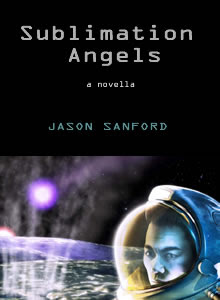 Jason Sanford's novella Sublimation Angels is a hard science fiction story set on the planet whose atmosphere has frozen, leaving humanity to continually mine the frozen air to survive. Into this comes Chicka, a young man struggling with the death of his identical twin and his twin's quest to understand their world--a quest which goes against the rigid nature of their survival-minded society.

The novella was first published in issue 224 (Sept./Oct. 2009) of Interzone. In addition to winning the 2009 Interzone Readers' Poll, Sublimation Angels is also a finalist for the 2009 Nebula Award and has been longlisted for the British Fantasy Award.

Jason Sanford's fiction has been published in Year's Best SF 14, Interzone, Analog: Science Fiction and Fact, Orson Scott Card's Intergalactic Medicine Show, Tales of the Unanticipated, The Mississippi Review, Diagram, Pindeldyboz, and other places. His stories have received a number of awards and honors, including being a finalist for the 2009 Nebula Award for Best Novella, winning both the 2008 and 2009 Interzone Readers' Polls, receiving a Minnesota State Arts Board Fellowship, being nominated for the BSFA Award, and being longlisted for the British Fantasy Award. His fiction has also been reprinted in several languages, including French, Russian, and Czech.

About Interzone
Interzone is Britain's longest running science fiction and fantasy magazine. It is edited by Andy Cox. Since 1982, Interzone has launched the careers of a great many SF and Fantasy writers. Interzone often is shortlisted for many awards, and has won the Hugo and British Fantasy Awards. It belongs to TTA Press, and is currently published bimonthly, in alternate months to Black Static.