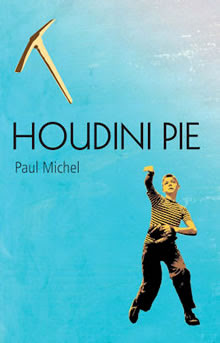 Houdini Pie is the story of a group of hapless entrepreneurs who mine for a mythical treasure under the streets of Los Angeles during the Great Depression in Los Angeles, 1934. Based on a true chapter of California history, Houdini Pie explores the depths to which a family, and a city, will sink when hard luck comes knocking and there's nothing left to lose.
Young Hal Gates is a celebrated pitcher for an upstart rural ball club, and the son of a notorious booze smuggler who vanished at the end of Prohibition. At his lonely mother's urging, and with the desperate backing of the municipal powers-that-be, he teams up with a crackpot geologist to mine for a Hopi treasure trove buried miles beneath the downtown streets. The deeper they tunnel the more Hal learns about loyalty, treachery, hunger and hope, and mostly--in ways he never would have imagined--about love.

A preview of the prologue is available online: Houdini Pie - prologue peek.

Paul Michel was born in Philadelphia and grew up in Ohio, where he graduated from Kenyon College in the late 1970s. He began writing fiction in the early 1990s, and in 1998 he received an MFA from the Warren Wilson College Program for Writers in Swannanoa, NC. He has won several writing awards and been recognized in over 30 national competitions, his work has appeared in over two dozen journals, including Glimmer Train, Southern Indiana Review, Inkwell and New South. Houdini Pie is his first novel.

About Bennett & Hastings Publishing
Bennett & Hastings Publishing is a small press founded by a writer and his wife, an editor, who want to support writers who have a day job. Think of us as an incubator for wordsmiths who want to build their reading audiences while awaiting their big break. We publish fiction and history featuring voices that often fall just outside the bell curve. Under history, include memoir and biography. We have plans to launch an imprint that will focus on short fiction.