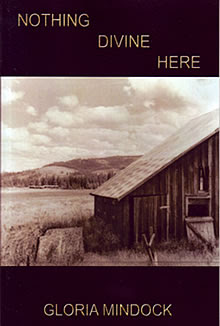 Nothing Divine Here is an accumulation of all the problems that people told to Gloria Mindock. No matter where she went, whether it was to the grocery store, clothes shopping or in other places, people would tell her their problems. Gloria decided to write about their experiences in first person. Being a Social Worker, she puts her empathy to good use.

"In a perpetual state of sadness and grief, these poems descend to the very core of the raw discourse of the soul, devoid of artifice and pose. The stark simplicity of their statement disarms us and leaves us vulnerable in front of the bitter reality of life." —Flavia Cosma, poet

Gloria Mindock is the editor of Cervena Barva Press and the Istanbul Literary Review, an online journal based in Turkey. From 1984-1994, she edited the Boston Literary Review/BLuR. She is the author of La Porţile Raiului” (Ars Longa Press, 2010, Romania), translated into the Romanian by Flavia Cosma and Blood Soaked Dresses, (Ibbetson St. Press, 2007). Her poetry has been widely published in many journals including Revista de Cultura, Aurora, Citadela, Phoebe, River Styx, Poet Lore, Blackbox, WHLR, Bogg, Pass Port Journal, Arabesques, and others. She has been nominated for a Pushcart Prize, St. Botolph Award and was awarded a fellowship from the Massachusetts Cultural Council distributed by the Somerville Arts Council.

About U Šoku Štampa
U Šoku Štampa means In Shock Press in Serbian. U Šoku Štampa is a small press that solicits poetry only. The press does not have a Website and likes to stay under the radar. The press is based in Centinje, Montengro and Springfield, VA.