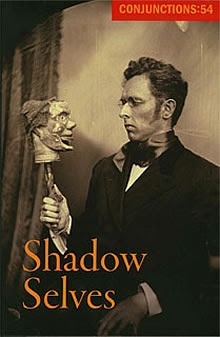 The mirror is human kind's most duplicitous invention. When we look into it do we see ourselves or an other? If we see an other, is that other a lie or some complex extension of a truth we don't quite grasp? And when we set down the mirror and imagine ourselves to be one or the other or some combination of both, who have we become? In this special issue of Conjunctions, the very idea of self is tackled in fiction and poetry that investigates everything from innocent misperception to studied deception, delusion to fraud, crazed misdemeanors to premeditated crime.

About Conjunctions
Bard College's literary journal Conjunctions publishes innovative fiction, poetry, criticism, drama, art and interviews by both emerging and established writers. For nearly three decades, Conjunctions' contribution to the literary community has been to provide a forum for over 1000 writers and artists whose work challenges accepted forms and modes of expression, experiments with language and thought, and is fully realized art.