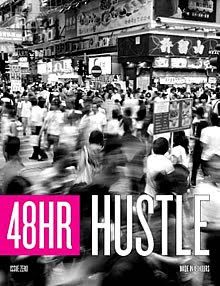 "On May 7th the editors of 48 Hour Magazine announced a theme for the debut issue: Hustle. Interested writers and artists had 24 hours to produce and submit work. The next 24 hours were for the editorial team to "snip, mash and gild" the best submissions until they had a magazine. At the end of that period, the magazine was available for purchase at MagCloud. And it's beautiful." - Utne Reader

"We made 48HR Magazine over one weekend in May. From noon on May 7th through noon on the 9th, a team circled up around the original Rolling Stone conference table in Mother Jones' offices to transform 1,502 submissions from around the world into a chorus of voices, all harmonizing around the same theme: hustle. 48 Hour Magazine features 60 pages of writers and artists from your favorite magazines sharing space with previously unpublished new talent, shaped by some of the best editors in the business. You're going to love it." -The Editors

About 48 Hour Magazine
48 Hour Magazine is a raucous experiment in using new tools to erase media's old limits. As the name suggests, the concept is to write, photograph, illustrate, design, edit, and ship a magazine in two days. No long commitments. No pitches. No grinding editing process.
A representative sample of "Hustle" is available online: Selections from Issue Zero.