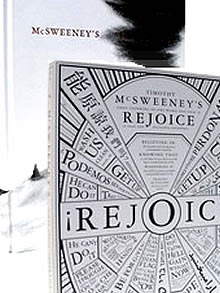 McSweeney’s Quarterly Concern publishes on a roughly quarterly schedule, and each issue is markedly different from its predecessors in terms of design and editorial focus.

In addition, both Kevin Moffett's and Wells Tower's stories, as well as Jim Shepard's "The Netherlands Lives With Water," have been selected for the 2010 edition of the Best American Short Stories.

To mark the event, McSweeney's has bundled issues 30 and 32 together at a special price, and has put the award-winning stories online.

About McSWEENEY'S
McSweeney’s began in 1998 as a literary journal, edited by Dave Eggers, that published only works rejected by other magazines. But after the first issue, the journal began to publish pieces primarily written with McSweeney’s in mind. Today, McSweeney’s has grown to be one of the country’s best-read and widely-circulated literary journals, with an expanding subscriber base and strong independent bookstore following. As a small publishing house, McSweeney’s is committed to finding new voices — Gabe Hudson, Paul Collins, Neal Pollack, J.T. Leroy, John Hodgman, Amy Fusselman, Salvador Plascencia and Sean Wilsey are among those whose early work appeared in McSweeney’s—and promoting the work of gifted but underappreciated writers, such as Lydia Davis and Stephen Dixon.