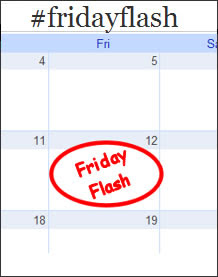 #fridayflash is a twitter-based flash story share+spread, organized by Jon M. Strother, who put the story + guidelines together for Daily s-Press

the story of #fridayflash:
#fridayflash, simply put, is an experiment in crowdsourcing word-of-mouth marketing for flash fiction on the web. Writers are constantly told they have to build an online presence, develop a following if they expect to succeed in the current environment. Who is to say whether that advice is right or wrong, nevertheless it is fairly constant. So, like many writers I started a blog and watched week after week as posts went without comment, and often times were unread. It got quite discouraging.

So I decided to try a little experiment in crowdsourcing. Twitter was already well established for calling attention to blog posts on everything form writing advice, to funny videos, to bad hair day rants – so why not fiction? I knew in order to succeed, the draw would have to be bigger than one writer shouting into the Twitterverse, so a meme seemed in order. The #followfriday meme was quite successful, so staying with that alliteration, I launched a flash fiction meme, initially called #fictionfriday, and announced it on the writer forums at Editor Unleashed, Writer's Digest, and The Writer's Chatroom. A handful of writer's on these venues joined me that first week.

Within a week or two of start up I discovered there was already a web-based writing site going by FictionFriday. Not wanting to encroach on the name, I asked for suggestions on a name change. I believe Keven J. Mackey suggested #fridayflash, or #fridayflashfiction. Character count being at a premium on Twitter, I decided to go for the short form. I also started putting out a list the next day with links to the participating author's posts. Thus was born The #fridayflash Report.

If there was a breakthrough moment it was when Maria Schneider allowed me to guest post on her blog, also called Editor Unleashed. We suddenly went form a handful of new participants per week to a dozen or more. I owe Maria a huge debt of gratitude for that, and miss EU immensely.

The rules are intentionally loose in keeping with the free and easy spirit of the thing. No one sweats it if you go slightly over 1000 words (though really long pieces are not much appreciated). Friday is defined as anytime it is Friday anywhere in the world. In fact, not everyone uses Twitter. We have the Collector, which ensures your story will be in The #fridayflash Report, and a Facebook group where an author who is not on Twitter can announce their story. Plus we have a wonderful group of very sharing participants who will tweet and retweet stories once they are aware of them. It's a very open and supportive group.

#fridayflash is open to all writers at all skill levels. There is no prompt. There is no theme. It is completely open ended, which always makes for a great diversity of stories every week. The only proviso is that graphic, gratuitous sex and violence are not appreciated. I reserve the right to not list such pieces in The #fridayflash Report, and will not retweet them.#fridayflash anthology
There is an anthology of #fridayflash due out very shortly – The Best of #fridayflash, Volume One. It contains more than sixty stories from both current and past #fridayflash authors. Like #fridayflash, there is no set theme or genre. It is a real mix of the types of stories one encounters on a weekly basis. It will be available both in ebook and print-on-demand format later this month (August 2010).

About Jon M. Strother
Jon M. Strother is a writer of fact and fiction. He lives in an inner suburb of St. Louis and enjoys cycling, gardening, and wasting far too much time playing Civilization III. For more about him, and excerpts of his writing, visit his website Mad Utopia.