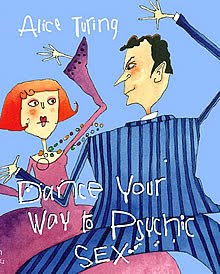 “We easily believe what we ardently desire to be true.”

Psychic Dancing is a New Age sensation, but is it a trick of the mind? A harmless self-help technique? Or a breakthrough in human consciousness, which will end all pain and disease?

Henrietta thinks people should stay the hell out of each other’s heads, keep their hands to themselves, and dance with people they know. Not with strangers. Not in public. And especially not psychically. That’s just ridiculous.

Leo makes money from reading minds, but detests all things psychic. Henrietta is falling in love with Leo’s girlfriend Belle, who loves Leo, who loves Denzel, who will only love him back if Leo says he’s gay. And all four of them are heading for a momentous Event which will turn their lives inside out.

Alice Turing is a published novelist whose first publisher ceased trading and whose second novel was published by Random House, but only in Germany. Several UK editors liked the book, but were worried that it would not be commercial enough. In the end she decided to self-publish and take some control back. She is not seeking fame, fortune or thousands of readers. She just wants to create a beautiful thing.

Alice will be printing a high quality hardback in limited print runs of 100 at a time. She is asking for payment in advance, and will not be holding copies in stock: Each print run will not be printed until enough people have ordered the book.