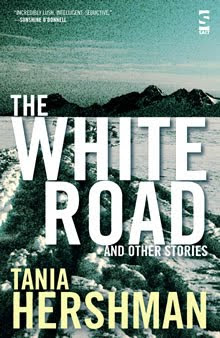 Born in London, Tania Hershman lived in Israel for 15 years working as a science journalist. The White Road and Other Stories, her first book, is published by Salt Modern Fiction and was commended, 2009 Orange Award for New Writers.

The collection contains 27 stories, half of which are inspired by articles from New Scientist magazine; Tania studied Maths and Physics at university and when she began writing fiction she wanted to find a way to combine both. The stories are not necessarily science fiction but "science-inspired" fiction. The rest of the book is flash fiction, very short stories. A week of 16 of Tania's flash stories - some of which was from the collection - was broadcast on BBC Radio 4's Afternoon Reading in June.

Tania Hershman is the 2008 European winner of the Commonwealth Broadcasting Association short story competition, and Grand Prize Winner of the Binnacle Ultra Short Contest, and her stories have been published and are forthcoming in literary magazines including the London Magazine, Smokelong Quarterly, Contrary magazine, Elimae, Litro, Electric Velocipede, Nature Futures and others. She is currently writer-in-residence in Bristol University's Science Faculty, writing short stories inspired by being in the labs.

About Salt
Salt is an independent publisher whose origins date back to 1990 when poet John Kinsella launched Salt Magazine in Western Australia. Now, Salt publishes over 80 books a year, focussing on poetry, biography, critical companions, essays, literary criticism and text books by authors from the US, the UK, Australia, New Zealand, Canada, the Caribbean and mainland Europe.

Discount offer: Salt offers Daily s-Press readers a 10% discount for this book: visit the Salt website here and enter the coupon code GM18py7n when checking out.