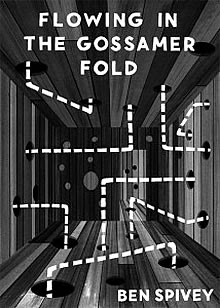 She folded her arms holding an invisible baby, combing its invisible hair, picturing it a blond; she would do that, and I would watch from around corners, holding the wallpaper and shutting my eyes in the dark, I’d only listen, but I knew what I’d have seen: her long legs and that invisible child.

Like the tagline to David Lynch's film Inland Empire, “a woman in trouble,” Flowing in the Gossamer Fold is a surreal, emotional, and trenchant novel of man in trouble.

“Part Jungian allegory, part surreal dreamscape, part Odyssean tramp, Ben Spivey’s Flowing in the Gossamer Fold is a romp through distorted time in a landscape carved by sudden oceans built from perpetual rain, where a cityscape has sidewalks littered with disappearing sages, and an edenic forest is graffitied with the father’s word. The sentences of Malcolm Blackburn’s midlife crisis are charged with the energy of a young man—the young man who penned this fucked up vision of pain and forgiveness, of what is ultimately the lesson of life: it’s beautiful, and it sucks.” –Jamie Iredell, author of Prose. Poems. a Novel., and The Book of Freaks

Ben Spivey has words at Abjective, Everyday Genius, The Corduroy Mtn., and others. An excerpt from Flowing in the Gossamer Fold was a StorySouth Million Writers Award notable story of 2009. He lives in Atlanta where he frequents the Solar Anus reading series (for whom he's read) as often as possible. He has two cats.

About Blue Square Press
Blue Square Press is located in New York and Atlanta. Forthcoming books are Theater-State by Jack Boettcher (2011) and Fuckscapes by Sean Kilpatrick (2012). An interview with Co-Editor David Peak about the formation of the press can be read in the most recent issue of Knee-Jerk Magazine.