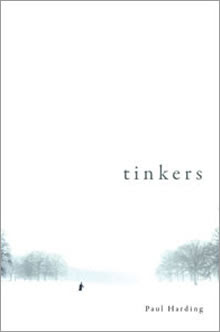 Harding's short novel Tinkers is the story of a dying man, George Washington Crosby, and his relationship with his father, who suffered from epilepsy and eventually abandoned his family because of the affliction.

Paul Harding studied at the University of Massachusettes from 1986 to 1992 while drumming in the grunge band Cold Water Flat. Tinkers is his first novel. An interview with Paul Harding is up in Open Source: Paul Harding's Magical Tinkers.

About Bellevue Literary Press
Bellevue Literary Press, founded in 2005, publishes literary and authoritative fiction and nonfiction at the nexus of the arts and the sciences, with a special focus on medicine. Their authors explore cultural and historical representations of the human body, illness, and health, and address the impact of scientific and medical practice on the individual and society. The mission of Bellevue Literary Press is to bring together medicine, science, and humanism through literature: "The common starting point for understanding most things is a story.”