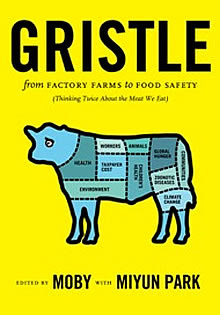 More than ever before, people are increasingly concerned about the impact of our factory-farming system of raising animals for food - and rightfully so. Gristle is for the growing number of people - from ominvores to vegans - who are thinking twice about the consequences of our industrial farm animal prodcution practices on workers, our health, the environment, communities, the animals, and more.

Multi-platinum musician Moby and leading food policy activist and expert Miyun Park have brought together fifteen of the country's leading voices on this issue--an eclectic group from such diverse backgrounds as farming, workers' rights activism, professional athletics, science, environmental sustainability, food business, and animal welfare advocacy--who together eloquently lay out how and why industrial animal agriculture unnecessarily harms workers, communities, the environment, our health, our wallets, and animals.

In the tradition of Michael Pollan’s The Omnivore’s Dilemma, Gristle combines hard-hitting facts with a light touch and includes fascinating charts and illustrations depicting the stark realities of America’s industrial food system

About the New Press
Established in 1990 as a major alternative to the large, commercial publishers, The New Press is a not-for-profit publishing house operated editorially in the public interest. It is committed to publishing in innovative ways works of educational, cultural, and community value that, despite their intellectual merits, may be deemed insufficiently profitable by commercial publishers. The New Press publishes about fifty titles each year.