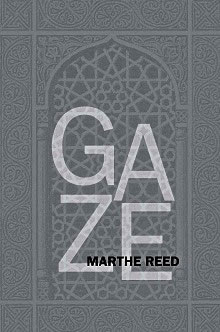 In the de-stabilized intersection of fashion, the war on terror, and cultural constructions of the feminine, Gaze explores the resulting tensions in a series of dichotomies central to an increasingly isolate and adversarial condition: Christianity/Islam, ancient/modern, sacred/secular, sexuality/spirituality, feminism/fundamentalism, power/resistance, self/other.
Rikki Ducornet says this about these intersections in Gaze: “In these moments the world is given breath, heat, and voice. All at once it approaches, and the beloved's unfettered body is revealed as the antidote to tyranny.” What we see and what we fail to see are constantly juxtaposed, exposing a flawed desire to “become.” Kate Bernheimer says of Gaze, “Too beautiful to articulate’—dressed, undressed, terrorized, and entrancing. These unveilings, these poems, how they haunt me. Riding Angela Carter on a poetry-horse, Reed hallucinates language with certain and dissolving rhythm. Gaze at them; go blind inside this mentalist’s mind. Marthe Reed is unrelenting, unrelentingly kind.”

About Black Radish Books
Black Radish Books was founded as a collective in 2009. Our editorial focus is to publish and promote innovative writing. Because we operate as a collective, our goal is to allow members to dictate the aesthetic. As such, our bent is best described as eclectic, with focus on the difficult and the surprising. Black Radish Books has two other books forthcoming this spring: Occultations by David Wolach, and Spectre by Mark Lamoureux. This summer look for The Incompossible by Carrie Hunter, Herso,- An Heirship in Waves by Susana Gardner, and The Dead Love Everyone by Jared Hayes. Ten more volumes of poetry are in the pipeline, coming out later this year and 2011.