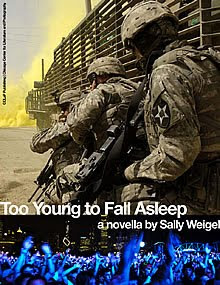 Why would a poetry-writing high-school emo girl from suburban Chicago volunteer for the Iraq War? And when both of her legs are blown off in a non-combat IED explosion, how will she ever recover?
The Chicago Center for Literature and Photography is proud to present its newest original novella, Too Young to Fall Asleep, the literary debut of talented local up-and-comer Sally Weigel. Originally written when she was still in high school, Asleep is one of the first-ever adult character dramas concerning the so-called "Millennials," a prescient and eerily mature look at the generation of youth just now entering college -- an entire nation of idealistic sincerity-seekers within a maelstrom of suicidal Gen-X parents, a nation of kids who have no problem getting wasted on weekends but feel horribly guilty when smoking cigarettes while doing so.
Weigel takes a razor-sharp look at this generation here, through the filter of the two events that have so far most influenced them -- the rise of the dark post-9/11 supergroup Radiohead, and the decimating of their numbers by Bush's 'war on terrorism' -- delivering at the end a haunting and thought-provoking snapshot of our current zeitgeist, in a sophisticated way that can only be done by an actual member of that generation.
A "pay what you want" experiment which can be downloaded for free if one chooses, Too Young to Fall Asleep marks the debut of a rising voice in the American arts, and you are sure to be both informed and moved by what she has to say.

Sally Weigel is a sophomore at Chicago's DePaul University. This is her first book.

About CCLaP
CCLaP Publishing is an imprint of the Chicago Center for Literature and Photography, an organization dedicated to promoting the best of the underground and cutting-edge arts. On top of the seven books it has put out since 2008, the center also maintains a popular website, produces a bi-monthly podcast, and hosts a growing amount of live events all over the city of Chicago.