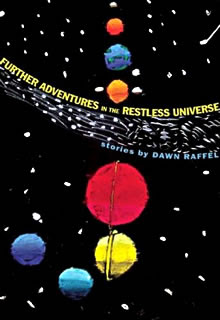 When Dawn Raffel was a very small child, her father used to read to her nightly from The Restless Universe--a layman's guide to physics by the Nobel Laureate Max Born. Although she loved the time spent with her father, she didn't--despite his statements to the contrary--comprehend a word of the physics. it was her first recognition that love so often comes with imperfect understanding.
The 21 stories in Further Adventures in the Restless Universe are about fathers, daughters, mothers, sisters, husbands, wives, strangers, lovers, sons, neighbors, kings, death, faith, astronomical phenomena, and the way the heart warps time. Of her previous work, one reviewer stated, "Raffel takes conventions and smashes them to bits" and another called it "extreme literature." Of Further Adventures, Publishers Weekly says, "Raffel's stripped-to-the-bone prose is a model of economy and grace."

Dawn Raffel's previous books are Carrying the Body (a novel) and In the Year of Long Division (stories). Her work has appeared in numerous journals and anthologies, including NOON, the Mississippi Review, Conjunctions, Unsaid, and the Anchor Book of New American Short Stories. She is completing a memoir in vignettes.

About Dzanc Books
Dzanc Books was created in 2006 to advance great writing and champion those writers who don't fit neatly into the marketing niches of for-profit presses. As a non-profit, 501(c)3 organization, Dzanc Books not only publishes excellent books of literary fiction, but works in partnership with literary journals to advance their readership at every level. Dzanc is also fully committed to developing educational programs in the schools and has begun organizing many such workshops and Writers In Residency programs. Upcoming from Dzanc are: The Taste of Penny by Jeff Parker, Love Doesn't Work by Henning Koch, and Best of the Web 2010 - the third edition of Dzanc's annual print compilation of the best online fiction, poetry and non-fiction (link: Dzanc Best of Web series).