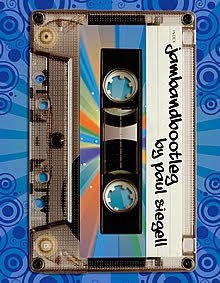 You’re at your computer. Tickets are a tense, electrifying few seconds from going on sale. Eyeing the time, you’re hitting “Refresh,” and elsewhere, all your friends are doing the exact same thing. That’s Paul Siegell’s jambandbootleg. A widespread, high-spirited head rush. Desperation, fretfulness—all out life-leaping. “The party starts in the parking lot,” indeed. With poems shaped like a guitar, the American flag, even a Golgi apparatus, Paul’s monumental artworks could easily transform into posters. His is a poetry of exploration, heart and astonishment. Simply put: read Paul Siegell’s music. Read it as if listening to the bangingest bootleg.

“For centuries, people have tried to take words and turn them into music. What Paul Siegell does in his collection of poetry, jambandbootleg, is take music and turn it back into words. And he does it exceptionally well, capturing both the excitement of concert-going and the poetic essence of the improvisational music scene.” —Marc Brownstein, bass player of the Disco Biscuits.

Paul Siegell is an editor at Painted Bride Quarterly and has contributed to The American Poetry Review, Coconut, Dusie, EOAGH, No Tell Motel and many other fine journals. He has also been featured in two national music and culture magazines, Paste and Relix, as well as elsewhere exciting. :Paul's other poetry collections: wild life rifle fire (2010) and Poemergency Room (2008) have been published by Otoliths, an Australian-based small press that focuses on contemporary text & visual poetry.

About A-Head PublishingA-Head Publishing is a west coast company with an east coast mentality. Founded in northern California, amidst the rolling quiet of Nicasio, the operation feels more like Ellis Island, where new writers leave old homes behind, to start a better life. If you feel under the industry, rather than in it, A-Head is probably a better fit. We print attitude, rather than burn it, and in our world, there's more than enough to go around. A-Head has also published the fiction books Treatise and Burning Babies by Noah Cicero.