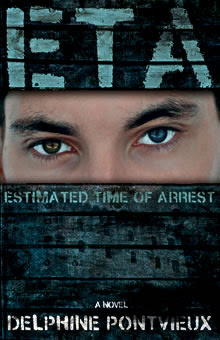 Delphine Pontvieux's ETA - Estimated Time of Arrest explores the ever current theme of terrorism, but with an original twist, since it is set in the heart of the Basque country, a region trapped between France and Spain, and struggling for its independence for many decades.
After participating in a pro-separatist march that turned violent in January of 1992, 21-year-old Lorenzo Lartaun Izcoa is wrongly charged with the fatal bombing of a police station in his home town. Irun is located right on the border between France and Spain, on the Atlantic Ocean. Lartaun finds himself on the Spanish Secret Service's "most wanted" list, branded an active member of the Basque terrorist group ETA.
He flees to Mexico where he lives in exile for two years, before being offered a chance to return to Europe with a new identity, in exchange for a favor for his boyhood friend. That favor, however, will prove to be more than he can handle once he finds out that Patxi is planning for a big event to shake Spanish politics.
What sets this thriller apart from many others is the in-depth view of the characters and the friendships that serve to advance the story. And while the characters and events depicted are entirely fictional, references to real life political culture and geographic locales make this story credible, giving the reader a chance to learn about the Basques and their homeland.

Delphine Pontvieux was born in Versailles and grew up in France. She graduated from the University of Burgundy in Dijon. She also lived, studied and worked in Australia, the USA, Spain and the Netherlands until she moved to Chicago, Illinois, in 1998, where she still lives today. Delphine loves the mountains and the seas. She is a scuba instructor, cave and technical diver, and ocean conservation advocate. As a writer, she regularly contributes to international diving publications.

About Miss Nyet
Miss Nyet Publishing is an independent venue dedicated to finding talented and creative writers with a unique voice in a wide array of fiction genres, with a preference for thrillers, suspense, romance and horror. An interview was recently up in the Small Press Review: Small Press Profile - Miss Nyet Publishing.