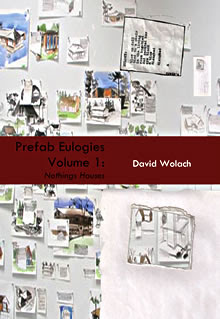 David Wolach’s powerpoems imagine us into a world where prefab texts, codes, lists, templates, and schemas rebel into habitations, “testy machines” and “the dumpster in a field abandoned by an American minimalist.” Prêt-a-lire never had it so right-on funny or fierce. Box it to go and take it away. —Amy King

Wolach says: "This is a transitional book in many ways--though coming out now, much of it is earlier than the poetry I've published in more recent chapbooks. Hence, the book reflects (if anything) a transition from installation and performing arts into the questions of contemporary poetry, with which I'd been engaged for those years, but which I'd only written about--until falling ill, which really meant, for me, being unable to move in ways that I'd been used to in performance and in daily life.
Questions of how to incorporate earlier performance work into this book, larger-scale site-specific installation pieces, or how to translate that set of interests onto the page, became the interesting problems I had to address, hence the "hybrid" or "conceptual" feel to much of the book. So, Prefab Eulogies spiders out of the book itself, onto other platforms, e.g., the BlazeVox Prefab Eulogies website, where one can listen to a live recording of some of Nothings Houses."

David Wolach is founding editor of Wheelhouse Magazine & Press, and curator of the series devoted to the intersection of experiments in texts & radical politics, PRESS. David's new book, Occultations, is forthcoming from Black Radish Books, and will be launched, along with forthcoming books by Brenda Iijima, Dorothea Lasky, and Eleni Stecopolous on April 13th, as part of Belladonna Books' "Year of New Books/New Releases" reading series. (belladonnaseries.org)