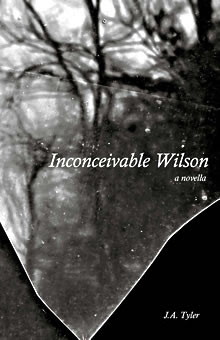 A woman in a red dress, ankles strapped in shoes, leaving a man at the airport, at a terminal, holding a photograph of him, this man, and on the back only written: Wilson.

Forgive him, he has become so much less now.

Wilson goes: planes, boats, walking until the sun quits rising, until the sun stops existing, and there he begins, there he becomes. A place where the trees change shape and purpose, the environment lost to nothingness, where people speak in clatters and clicks, incomprehensible. And Wilson unties within their circle, these people of pitch and tar, this village, these men and their women, their children. He should be reading them, writing words, penning a culture, creating a world from the tips of sentences, but he is instead consumed by them, hearing always and only the rattling of bones and laughter. Curtains open and he becomes less.

Forgive him, he should not have gone.

"Laid out in the form of 100 small prose-poems, the novella isn’t so much a story as a collection of one-page (or sometimes one-line) images and memories." - Kirsty Logan.

J.A. Tyler is the founding editor of the online quarterly Mud Luscious (2007) and Mud Luscious Press (2008), both "venues for aggressive / experimental writing.”