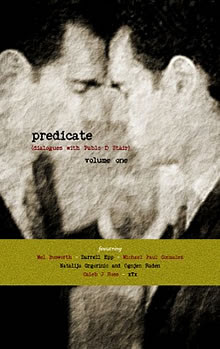 Predicate is a bi-annual journal of literary dialogue from Brown Paper Publishing. Each edition features dialogues from a variety of independent novelists, poets, and authors of short-fiction. These authors participate in a three-tiered dialogue process with novelist and Brown Paper Publishing founder Pablo D’Stair. The dialogues are set through a particular filter selected by D’Stair, but the subject, direction, nuance, and conclusion of each dialogue is dictated by the artists. These dialogues are not offered as simply introductory Q & A sessions, nor as advertisements for any particular volumes—these rather are Portraits of the Artist: their individual drives, their thoughts on influences and contemporaries, and their in-depth feelings as to every minutia and nuance of the question "What Is Literature?"
Predicate is meant to position independent literature where it rightfully should be—at the forefront of earnest, imperatively considered literary discourse. Every edition of Predicate is sold as inexpensively as possible and is made available as a free PDF download on the site.

The first edition features dialogues with authors Mel Bosworth (When The Cats Razzed The Chickens), Darrell Epp (Imaginary Maps), Michael Paul Gonzalez (Angel Falls—currently in the semi-finals of the Amazon Breakthrough Novel Award), Natalija Grgorinic and Ognjen Raden (Mr. And Mrs. Hide), Caleb J Ross (Charactered Pieces), and xTx (I Dreamed I Fucked Stephen King While We Were Both On Vacation In The Cayman Islands With Our Spouses).

Pablo D’Stair’s own works (Kaspar Traulhaine; approximate; i poisoned you; bleed the ghost empty, bleed the ghost dead (forthcoming in June 2010) and witness nothing (forthcoming in September 2010) are distributed through Brown Paper Publishing in print editions absolutely free of charge in exchange for active reader feedback—positive, negative, or ambivalent. In the event readers do not wish to offer feedback, a purchase at cost option exists and the novels sell for either $3 or $3.50.