One Damn Thing After Another - Tim Hall (OW) 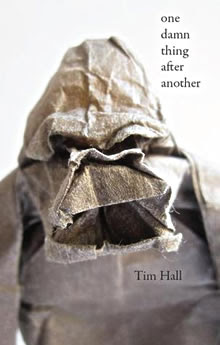 One Damn Thing After Another builds on the themes of word contagion and weaponized memes that the author explored in his previous book, 2009’s How America Died. Many of the characters in these stories have likewise been sickened by language: they exchange psychotic emails, adopt covert online personas, write fictitious book reviews and preach the authoritarian philosophies of Ayn Rand, oblivious to the harm they might be doing to themselves or others.

A scholar and a dropout clash in The Condition. Fact and fiction blur in Drunken Fantasies, Vol. 1 as the author takes readers on a painfully funny tour through the insanity of his own booze-fueled grandiosity. For those who remain undeterred by these warnings, the author has also included a supplement that shows readers How To Be An Underground Lit Legend by employing many of the same tactics.

Tim Hall is native of New York City. He now lives in a small town in northeastern Illinois with his wife and son, simply because he couldn’t quite jump far enough to reach California. One Damn Thing After Another is his fifth book.

About OW Press
OW Press is the publishing extension of the Outsider Writers Collective. Officially formed in 2009, OW Press publishes books by Outsider Writers Collective members and contributors. The press currently has four titles, most recently Tim Hall’s book and Caleb J Ross’s Charactered Pieces: stories. Forthcoming in the fall of 2010, in collaboration with Tainted Coffee Press, is Shome Dasgupta’s chapbook i am here And You Are Gone.