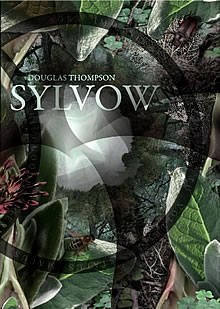 In his novel Sylvow, Douglas Thompson follows his cast of characters through a spectacular clash between everyday life and life on the evolutionary scale – as society dissolves and is stripped away under the onslaught of surreal environmental disaster. The novel explores the disastrous state of civilization and its effect on both ourselves and the world around us – in the process touching on elements as diverse as literary surrealism, philosophical tract, horror, disaster novel and visionary science fiction.

"Thompson likes his maybes, his doubts and ambiguities, the darkness of the forests of our minds. Come in and enjoy this wild walk in the woods, and step out again unscathed –maybe." - Martin Bax, from the Introduction.

Douglas Thompson has published short stories in a wide range of magazines and anthologies, most recently New Writing Scotland, Chapman, Ambit, and reviewed architecture for The Herald. He won second prize in the Neil Gunn Writing Competition in 2007, and currently works as an architectural designer and computer 3d-visualiser. His first novel, Ultrameta, was published by Eibonvale Press in August 2009.

About Eibonvale Press
Eibonvale Press is a small press run by a writer, artist and reader who loves books. "It's as simple as that. It is not intended to be particularly commercial or make large sums of money for me or anyone concerned (though it would be nice if it did, of course!), but it aims to produce beautiful and lovingly-designed editions of excellent writing in modern horror, magic realism and the surreal."

editor's note: there is a related review on visionary/desaster books (and films) online in the editor's blog, including a novel by Doris Lessing, Sylvow (with a quote), the film 2012, and our dealing with those future scenarios: "popcorn armageddon"
Eingestellt von Dorothee um 1/17/2011