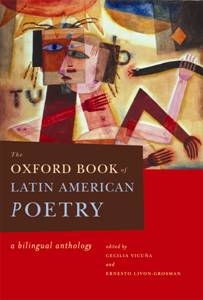 The Oxford Book of Latin American Poetry is the first anthology to present a full range of multilingual poetries from Latin America, covering over 500 years of a poetic tradition as varied, robust, and vividly imaginative as any in the world.

Editors Cecilia Vicuña and Ernesto Livon-Grosman present a fresh and expansive selection of Latin American poetry, from the indigenous responses to the European conquest, through early feminist poetry of the 19th century, the early 20th century "Modernismo" and "Vanguardia" movements, later revolutionary and liberation poetry of the 1960s, right up to the experimental, visual and oral poetries being written and performed today. "The most comprehensive, representative, and up-to-date survey in English of Latin American Poetry, bar none." --Library Journal

An interesting and comrehensive review by Ken L. Walker is up in Coldfront: review link, the review includes several quotes from poems.

The editors: Cecilia Vicuna is an independent poet, artist, and editor (here'a some of her own work: "Water Writing: Anthological Exhibiton"). Ernesto Livon-Grosman is Associate Professor of Hispanic Studies in the Department of Romance Languages & Cultures at Boston College.