Qantum Genre in the Planet of Arts (Paraphilia) 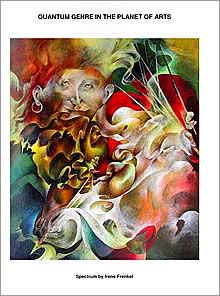 Quantum Genre in the Planet of Arts is an E-thology dedicated to the Quantum Genre in literature and art. Beautifully designed and illustrated, the e-thololgy offers a “weird-weird” fiction whose “quantum” quality lies in a way of representation of characters and their “obscure” world. It has nothing to do with sci-fi or the mainstream plot-oriented fiction. Both literary works and artistic images included in the anthology reveal a universe of diversified possibilities and characters whose quantum multiplicity and uncertainty would make one.

The anthology presents short stories by Tantra Bensko, Tom Bradley, Rachel Kendall, Dorothee Lang, Kyle Muntz, j.a.tyler, D. Harlan Wilson, and others. An article by an acclaimed film critic, Betty Jo Tucker, a founding member of the San Diego Film Critics’ Society, opens the door to the QG in cinema. It is followed by a script by Misha Chariton. Last but not least, we are proud to present an excerpt of a truly fascinating novel, Scaraboccio, quantum in essence, written by Grace Andreacchi. You can read this anthology online or download and read at your leisure: PDF.

The e-thology is edited by V. Ulea (Vera Zubarev), Ph.D., teaches decision making in chess literature and film in the University of Pennsylvania. She has published books of literary criticism, poetry and prose, including most recently, a collection of short stories, Snail (previously featured in s-Press). She writes in Russian and English, and recently become a poet laureate of Paustovsky Municipal Prize (Odessa, Ukraine).

About Paraphilia
Paraphilia is an unlicensed, underground enterprise that renounces established and arbitrary rules, regulations, guidelines, genres, categories, and all other manmade shackles. Paraphilia publishes Paraphilia Magazine and books.