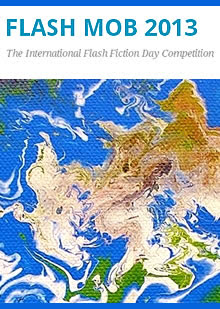 Flash Mob 2013 is a hybrid blog carnival and competition celebrating flash fiction. On June 22 — International Flash Fiction Day — winners will be announced and feted in various ways, beginning with a flash mob happening here and elsewhere, and also prizes, prizes and more prizes.

Flash Mob stories from Africa, Asia, Europe, America, Oceania... Following the flash call, authors from all around the world wrote a flash story and published it directly in their blog. Links to the stories are now online at: Flash Mob 2013 - click the different continent links on top, and then on the author images to get to the story - here are the shortcuts:
Flash Mob: Africa - Asia - Europe - The Americas - Antarctica - Oceania