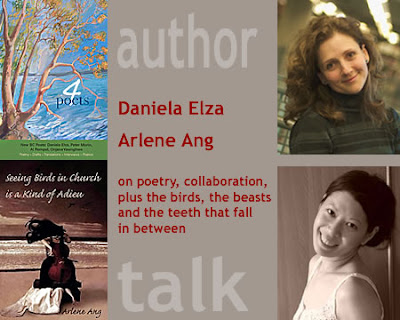 ABOUT THE AUTHORS + THE TALK

Daniela Elza is a free-range poet, and a non-medicated scholar of the poetic consciousness. She has rel.eased more than a 140 organic poems into the wor(l)d in over 42 publications. Her inte.rests lie in the gaps, rubs, and b.ridges between poetry, language, and philosophy. She is currently compiling her second manuscript and collaborating with fellow poets. Daniela is the recipient of this year's Pandora's Collective Citizenship Award. She lives with her family in Vancouver and spo.radically blogs at Strange Places.

Arlene Ang is the author of The Desecration of Doves (2005), Secret Love Poems (Rubicon Press, 2007), and a collaborative book with Valerie Fox, Bundles of Letters Including A, V and Epsilon (Texture Press, 2008). Her third full-length collection, Seeing Birds in Church is a Kind of Adieu was published by Cinnamon Press in 2010. Her poems have appeared in Ambit, Caketrain, Diagram, Poetry Ireland, Poet Lore, Rattle, Salt Hill as well as the Best of the Web anthologies 2008 and 2009 (Dzanc Books). She lives in Spinea, Italy where she serves as staff editor for The Pedestal Magazine and Press 1. Website: arlene ang, Blog: event museum

This author talk took place in the virtual daily café in September. 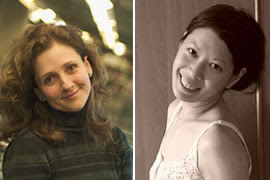 Arlene: To begin at the beginning, how did you get started with poetry? How did this influence your writing?

Daniela: I have written poems for as long as I can remember. In the beginning, mostly for fun, for friends and family, for different occasions. Recently, my parents read me over the phone a poem I wrote for their anniversary. I was touched. They have kept it for close to three decades. There was something very rewarding and magical to express in words (words available to every one), something that touches another. Something I could give as a gift. It is empowering, especially for a child, this kind of giving. To create something real with your words. I am still under that spell. After two Masters degrees and an almost PhD I have not changed my mind about the power and magic of poetic language.

And for you, Arlene? Why poetry?
Arlene: What fascinates me about poetry is how it involves the reader and allows different interpretations depending on who's reading it. It's like Da Vinci's Mona Lisa and people would stand there saying: "That's a man. Trust me." "Don't like her. Bet she poisoned puppies and children." "Look at her hands. That's chronic arthritis for you." I find it quite fascinating. Fiction, on the other hand, requires less creativity on the reader's part. I also like to think that poetry has a higher alcohol content than prose since it's a distillation of experience or thought. It's no incident that alcohol travels faster in the blood stream and gives a nice rush to the system.

Daniela: Freedom in interpretation that poetry offers is important. Perhaps the kind of freedom that one experiences in reverie. Isn’t that how we come to own a poem? Although we do not tend to teach it this way. There is a tendency to put a straitjacket on it. Interesting you liken it to alcohol. Robert Bringhurst (2007) says: "Poetry, like alcohol and sex, is subject to rules and invested with ritual because of the threat it represents." 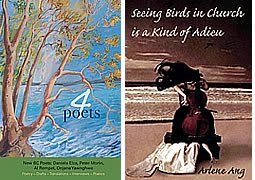