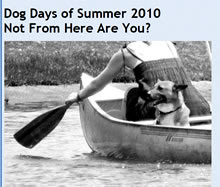 Dog Days of Summer 2010 features 80 authors from around the globe and their 101 word entries into the recent flash-fiction contest sponsored by Not From Here Are You? Blog.

Summer is of course a relative term depending on which side of the equator you reside on. In the northern hemisphere, June 21, 2010 marked the first day of summer and September 23, 2010 signifies the first day of fall. In the southern U.S - where editor Michael J. Solender resides - folks start complaining about the heat in May and continue well into October, with the 101 days between May 25th and September 6th being unofficially known as the “Dog Days of Summer.” - Why Dog Days? Because in the brutal humid heat of the south, even our four legged friends don’t want to be left outside.

What better diversion for Flashers than to write about it. And write they did. The gauntlet was thrown down as writers were asked to submit flash fiction pieces of exactly 101 words in length and containing the words “summer” and “heat.”

The collection that follows represents the best of those efforts accompanied by the magnificent photography of Kristin Fouquet.

The stories? As varied as the Summer. Classic literary tales, NOIR and Pulp crime drama, Summer Fun, Sci-fi and much much more.

Michael J. Solender writes a weekly Neighborhoods column for The Charlotte Observer and contributes frequently to Charlotte ViewPoint and Like The Dew, Journal of Southern Culture & Politics. Solender’s micro-fiction and poetry has been featured online at Bull Men’s Fiction, Calliope Nerve, Danse Macabre, Dogzplot, Full of Crow, Gloom Cupboard, Writers’ Bloc and over one dozen other venues. His essay "Unaffiliated" will be featured in the upcoming print anthology Topograph, New Writing From the Carolinas and the Landscape Beyond, published by Novello Festival Press in the fall of 2010.