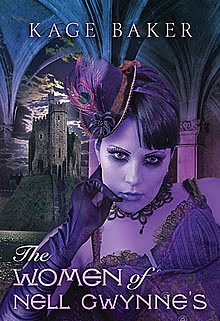 Kage Bakers's novella The Women of Nell Gwynne’s was nominated for a Hugo Award and a World Fantasy Award in the Best Novella categories. On May 15, 2010, the work was awarded the 2009 Nebula Award in the category novella. Sadly, Baker didn't live long enough to receive the award.

Set in early-Victorian London, The Women of Nell Gwynne’s is a steampunk novella that tells the story of Lady Beatrice - once a proper British daughter, until tragedy struck and sent her home to walk the streets of London. But Lady Beatrice is no ordinary whore, and is soon recruited to join an underground establishment known as Nell Gwynne’s - the finest and most exclusive brothel in Whitehall; and at the same time, the sister organization to the Gentlemen’s Speculative Society. "The beautifully drawn Victorian era is neatly spiced up with futuristic technology such as mechanical eye implants. Baker’s fans will delight in this slight, bawdy and funny confection." - Publisher's Weekly

There's an excerpt up on the publisher's page, just scroll beyond the reviews: Excerpt Nell Gwynne's .

Kage Baker (June 10, 1952 – January 31, 2010) was an American science fiction and fantasy writer. She was born in Hollywood, California and lived there and in Pismo Beach most of her life. Before becoming a professional writer she spent many years in theater, including teaching Elizabethan English as a second language. Her first stories were published in Asimov's Science Fiction in 1997.