Short Circuit: A Guide to the Art of the Short Story (Salt) 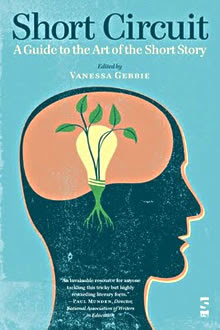 Short Circuit is the first textbook written by prize-winning writers for students and more experienced practitioners of the short story. The 288 page guide brings together 24 specially-commissioned essays from well-published short story writers who are also prize winners of the toughest short story competitions in the English language.

Each essay picks up on one or more craft or process issues and explores them in context, within the creative practice of the writer. Much of the guidance can equally be applied to writing longer fiction. A 25-page excerpt of Short Circuit is available online: Short Circuit pdf-sample.

Short Circuit is edited by Vanessa Gebbie. Contributions include five essays from winners of The Bridport Prize. There are interviews with Clare Wigfall — winner of The National Short Story Award — and with Tobias Hill whose short story collection won the PEN/Macmillan Silver Pen Award. Other prize-winning writers in this book include winners of The Asham Award for New Women Writers, The Fish Short Story Prize, The BBC Short Story Prize, The Commonwealth Award, Writers Inc. Writer of the Year, The Willesden Herald Prize, NAWG Millennium Award for Radio Short Story and the Per Contra Prize.

Vanessa Gebbie’s short fiction has won over forty awards, including prizes at Bridport, Fish (twice), Per Contra (USA), the Daily Telegraph and the Willesden Herald, from final judges such as Zadie Smith, Tracy Chevalier, Michael Collins and Colum McCann. She is a freelance writing teacher working with adult groups at literary festivals as well as school students. Many of her prize-winning stories are brought together for the first time in Words from a Glass Bubble (Salt, 2008). A second collection, Ed’s Wife and Other Creatures, is forthcoming.

About Salt
Salt is an independent publisher whose origins date back to 1990 when poet John Kinsella launched Salt Magazine in Western Australia. Now, Salt publishes over 80 books a year, focussing on poetry, biography, critical companions, essays, literary criticism and text books by authors from the US, the UK, Australia, New Zealand, Canada, the Caribbean and mainland Europe.