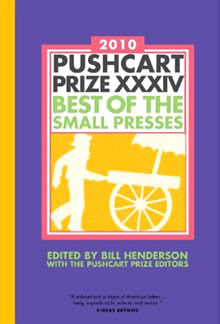 The Pushcart Prize - Best of the Small Presses series is published every year since 1976, and since the first issue, has represented hundreds of presses and thousands of writers of short stories, poetry and essays in the pages of their annual collections.

2010 Edition
The Pushcart Prize has an official homepage with general information at Pushcartprize.com. Some more detailed information on the 2010 Edition is available in a Publisher's Weekly Review: "This year's Pushcart anthology offers consistently good prose and poetry that covers a broad range of styles and topics. On the historical front, "Tied to History" by Greil Marcus and "A Poetics of Hiroshima" by William Heyen are among several pieces that reinvigorate well-plowed terrain from WWII.. .. The anthology is at its most innovative with its poetry, which surpasses the prose in experiments with language and form." (for the full review, visit the Editorial Reviews at the Amazon/Pushcart page.)

Behind the Scenes of Pushcart (or: Pushcart Dreamin')
Earlier this year, 2 essays provided some insights on the Pushcart nomination process. The first essay is from Mark Halliday, "Pushcart Hopes & Dreams", published in Pleiades (in print), and thus not available online. Yet author Mary Miller read the piece, and wrote a commentary with some quotes, published in Luna Park: "I’d never thought much about how it [the Pushcart Prize nomination process] worked, but this is what I always assumed: an editor at one of the contributing small presses listed in the back of the anthology recommends a particular story or poem and then the people who are listed in the front, along with the big cheese, Bill Henderson, make a final decision. After reading Mark Halliday’s essay, “Pushcart Hopes & Dreams,” in the current issue of Pleiades, however, it’s clear that my assumption was wrong..."
the full commentary is online at Luna: Pushcart Dreamin'