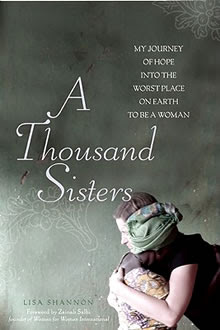 A Thousand Sisters is the story of how a single moment can change a life – and the lives of others. How a life’s mission can come to you, not in contemplation, but sprawled out on the couch, watching TV:

"I had a great life—a successful business, a fiancé, a home, and security. But in the wake of my Dad’s death, and soon-to-be thirty years old, I found myself depressed, camped out in my living room watching Oprah. It was there that I learned about Congo, widely called the worst place on earth to be a woman. Awakened to the atrocities –millions dead, women being raped and tortured, children starving and dying in shocking numbers –I had to do something. A Thousand Sisters chronicles how I raised sponsorships for Congolese women, beginning with a solo 30-mile run, and then founded Run for Congo Women..." - Lisa Shannon

Lisa Shannon recently spoke about Congo and her book with ABC World News, you can watch the interview online here.

Lisa Shannon presently serves as an ambassador for Women for Women International. She previously owned a photography production company, where she served as art director and producer. She lives in her hometown of Portland, Oregon. A Thousand Sisters is her first book.

About Seal Press
Inspired by the simple yet radical notion that a book can change a woman’s life, Seal Press is devoted to publishing titles that inform, reveal, engage, delight, and support women of all ages and backgrounds. Seal Press was founded in 1976 as a small DIY publisher to provide a forum for women writers and feminist issues, and since then, Seal has published groundbreaking books that represent the diverse voices and interests of women. "From cultural revelation to pop culture, our books are smart and fun, insightful and hilarious."