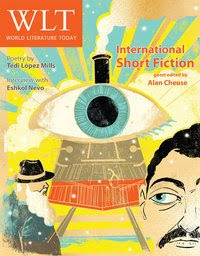 Alan Cheuse is best known for his frequent book reviews on National Public Radio’s All Things Considered. As part of the International Short Fiction issue, his essay "The Form Read Round the World: American Short Fiction and World Story" is online at WLT, author profile included.

About World Literature Today
World Literature Today was founded as Books Abroad in 1927 by Roy Temple House, a scholar of vision from the University of Oklahoma. From a modest seedling of 32 pages in January 1927, Books Abroad grew to 256 pages by the end of its fiftieth year (Autumn 1976). In January 1977 the journal became known as World Literature Today, reflecting the truly international range that its coverage and reputation had acquired. Now in the 84th year of uninterrupted publication, WLT is the second-oldest such literary periodical in the United States, and remains devoted to their mission of serving students, scholars, and general readers worldwide.