The Summer of Genji 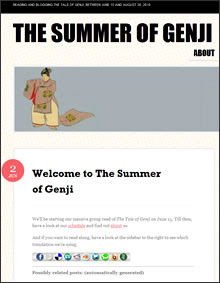 The Summer of Genji is a joined approach to tackle a classic read: The Tale of Genji by Murasaki Shikibu. This book is considered to be one of the world's first novels, its size: a sound 1216 pages, the author: a lady in the Heian court of eleventh-century Japan.

Two online lit magazines - The Quarterly Conversation and Open Letters Monthly now teamed up to read this book between June 15 and August 30, at the pace of 90 pages a week, as summer read. Their reading blog is: The Summer of Genji

The readers invite everyone to join their journey: "We’ll be offering lots of commentary and candid opinions on a classic text that many consider the world’s first novel. We hope that you’ll join us! We want to have as many people as possible reading along with us, offering their own thoughts in the comments."

Even if you don't have the time (or patience) for a 1000+ book, it's well worth visiting the reading website. It already includes a whole string of posts that lead far beyond the story, to topics like translation / categorization, and to the process of reading itself, especially when it comes to books from other hemispheres. How to approach such a book? That's what George Fragopoulos considers in his blog entry "Thoughts of Genre": ".. the need to situate, or “triangulate” oneself as a reader in relation to a text that comes to us with an insurmountable amount of historical and cultural distances. The distances between ourselves and the Genji are vast, and many of them are, in fact, rather insurmountable—as they would be with any other text, albeit it in different ways; and before many of us begin reading the Genji—or begin re-reading it—I would simply like to raise some questions in regards to genre and translation."
But despite the distance, human nature is universal - as the blog post "Coming Back to Genji" by genjimaureen points out, in an unexpected parallel: "Back in New York, I loved The Tale of Genji, and hated that I loved it. It was about people who appeared to lack both moral and practical sense, were bound by the conventions of a be-numbingly complicated caste system, and spent inordinate amounts of time judging other people by their clothes. Even when they managed to be charming, most of the characters – Genji himself in particular – were only so in the service of being odious in some other respect. It was rather like high school. It was very like New York."