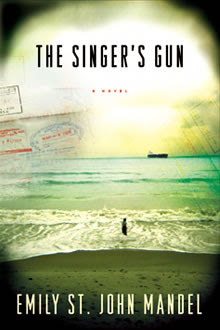 In The Singer's Gun, a novel of international crime, false identities, the depths and limits of family ties, and the often confusing bonds of love, Emily St. John Mandel explores the dangerous territory between one’s moral compass and the heart’s desire.
Everyone Anton Waker grew up with is corrupt. His parents deal in stolen goods and his first career is a partnership venture with his cousin Aria selling forged passports and social security cards to illegal aliens. Anton longs for a less questionable way of living in the world and by his late twenties has reinvented himself as a successful middle manager. Then a routine security check suggests that things are not quite what they appear. And Aria begins blackmailing him to do one last job for her. As Anton’s carefully constructed life begins to disintegrate around him, he’s forced to choose between loyalty to his family and his desires for a different kind of life. When everyone is willing to use someone else to escape the past, it is up to Anton, on the island of Ischia, to face the ghosts that travel close behind him.

The Singer's Gun was #1 on the Indie Next List for May 2010.
"A gripping, thoughtful meditation on work, family, and the consequences of major life choices." - Booklist

Emily St. John Mandel was born on the west coast of British Columbia, Canada. She studied dance at The School of Toronto Dance Theatre and lived briefly in Montreal before relocating to New York. Her first novel, Last Night in Montreal - a June 2009 Indie Next pick and was a finalist for ForeWord Magazine's 2009 Book of the Year - was recently released in paperback.

About Unbridled Books
Fred Ramey and Greg Michalson formed Unbridled Books in 2003, a renewal of their partnership dedicated to publishing high-quality works that are moving, beautiful, and surprising. "We chose the name to designate a publishing venture that is both energetic and independent. We want to be able to continue our longtime discussion about what allows a novel to touch our hearts and our minds at once. And we want our readers, booksellers, and reviewers to trust that when they pick up an Unbridled book, we’re inviting them to enjoy that rarest of pleasures, a good read."