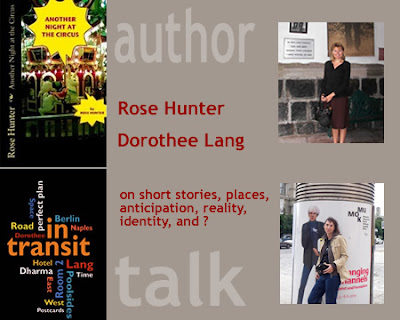 In June, the two authors started a mail dialogue about their books, and themes connected to the stories included: story locations / life situations; layers of identity; accidental intimacy; linked short story collections; going places (London, Mexico City, Asia), the gap between anticipation and reality and the stories coming from there...

The dialogue developed in circles and zigzags, this is a cleaned-up and sorted version of it. 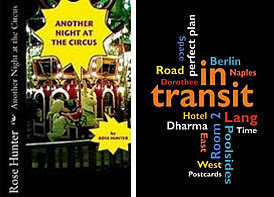 Dorothee (27.6.): I read Circus while completing in transit, and when I returned to it last week, the first paragraph drew me right in again. What stood out for me is the vastness of its scope, with the story locations reaching from Canada to Texas to Australia, and the life situation of Alex [who works in the sex trade industry] a different one in every chapter.

While moving from one chapter to the next, I felt that your use of the scenes, the way they are like pieces of a story, but aren’t giving away the complete story, open the read to a larger dimension. I found myself wondering about what happened in between the places / chapters. At the same time, those blank spots between the chapters were a vital element to the collection, I felt, the space for Alex to withdraw to, and for the reader to reflect on. Much like life, in fact, where we usually only get to know episodes of the whole story.

Also, following the Circus theme, and the carousel image, I thought that the stories are in fact taking the readers on a ride, and are spinning into each other, without defined start and stop. From end, you could go to start again, and go on one more round.

What I wondered: are there more stories of Alex, stories that aren’t part of the collection?

Rose (29.6.): Thanks for your comments on Circus, very interesting and helpful to me. In fact there may have been other stories that didn't end up making it in there. I say maybe, because the book is quite old; the first drafts for it were written in 2003. The original drafts were lost a long time ago, in various moves.

Re the blank spots, gaps - I had an idea in my head about what a linked collection of short stories was supposed to be, which was precisely this, swooping down to pluck a moment in time, out of an ongoing, larger story, which wouldn't be told, or would be told only in fragments. For me that was the difference between it and a novel.

I'm not sure all this was conscious, but in retrospect it seems to be a form that suits the mental state of the protagonist/narrator. I don't think a person like Alex even thinks in terms of whole stories, in the sense of ones with the "beginning, middle, and end". She doesn't have that coherent sense of her own identity, or belief in the sense in the events around her.

I tried to build this into the collection at a few points, for example, when a john asks her for stories, and she isn't able to deliver the kind that he wants - they're not his idea of "stories" either...