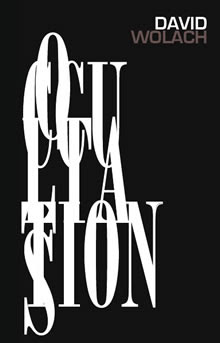 Occultations is David Wolach’s first full-length collection of poems and the second release from the book publishing collective, Black Radish Books (BRB). This 4-part cycle plus essay engages, through procedural ritual and other poetic modes, the performativity, poetics, and politics of the body—as site of resistance, as tool of power, and as inscription of the catastrophic event of neoliberal capitalism.

"An occultation is a withdrawing, a flight or sentence into non-existence. In David Wolach's Occultations, the reader becomes propinquitous to so much that she can't see, so withdrawn has the actual world become through a media which functions as the eyes and ears to the detriment of a becoming proprioceptive. By amplifying the senseless via pun and other synaesthesic language effects, Wolach overturns common sense and returns his reader to their senses. What would be contemporary peeks out through Wolach's picnolepsy. Reading Occultations, 'I' takes refuge in loss, lack, and non-presence saved only by what cannot be redeemed: the wreck of our bodies shored by the catastrophic convergence of late capitalist Neoliberalism and cross-cultural moral fundamentalisms." - Thom Donovan

David Wolach is professor of text arts, poetics, and new media at The Evergreen State College, and visiting professor in Bard College’s Workshop In Language & Thinking. He is the author of several books, most recently Prefab Eulogies Vol. 1: Nothings Houses (BlazeVox), Hospitalogy (Scantily Clad Press, forth. 2009-10), Acts of Art/Works of Violence (SSLA/Univ. of Sydney), and book alter(ed) (Ungovernable Press, 2009). His poetry has appeared in numerous journals, most recently 5_Trope, No Tell Motel, XPoetics, Dusie, Little Red Leaves, and The BlueFifth Review. Recipient of grants from the Washington Arts Council and the Olympia Fund for Diversity in the Arts, Wolach’s work is often site specific and uses multiple media.

About Black Radish Books
Black Radish Books was founded as a collective in 2009. Our editorial focus is to publish and promote innovative writing. "Because we operate as a collective, our goal is to allow members to dictate the aesthetic. As such, our bent is best described as eclectic, with focus on the difficult and the surprising." Forthcoming books: The Incompossible by Carrie Hunter, Herso,- An Heirship in Waves by Susana Gardner, and The Dead Love Everyone by Jared Hayes. Ten more volumes of poetry are in the pipeline, coming out later this year and 2011.