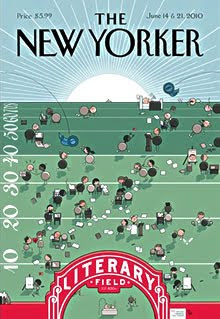 In June, The New Yorker released a double fiction issue. What made the headlines wasn't the release of a fiction issue, but the title and concept of it:

There are also several stories from the issue online: An Honest Exit by Dinaw Mengestu, The Erlking by Sarah Shun-lien Bynum, The Young Painters by Nicole Krauss.

Also available online are brief interviews with every writer: Author Q & A, the questionnaires are accompanied by an introduction by the editors and by a live chat transcript of the summer issue.

The introduction explains the base approach of the editors, and draws the parallel to their fiction issue of 1999: "Last winter, when we came up with the plan to devote this issue to young fiction writers who we believe are, or will be, key to their generation, we took a look at a similar issue that we published, in 1999, titled “The Future of American Fiction.” Back then, we had to decide how we were going to decide: did we want to choose the writers who had already proved themselves or those whom we expected to excel in years to come? A good list, we came to think, should include both." (sidenote: when the New Yorker's list was issued in 1999, it included future big-name authors such as David Foster Wallace, Jonathan Franzen and Jhumpa Lahiri.)

The 2010 summer issue caused a stir, discussions about the validity of such lists and the methodology - an effect that probably was both expected and intended by the editors. Here's another quote from the introduction: "The habit of list-making can seem arbitrary or absurd, leaving the list-makers endlessly open to second-guessing (although to encourage such second-guessing is perhaps the best reason to make lists)."

To read some of the essays and discussions stirred by the issue, try this search link: google search: "new yorker fiction 40 under 20 discussion" - and dip into essays like the Gawker's "How to Complain About the New Yorker's 20 Favorite Writers Under 40" or the MFA Weblog analysis "The New Yorker's 20 Under 40 List, and MFA Rankings". For some contemplation on writing, visit the "Special Rumpus lamentation with possible added pep talk" by Steve Almond.

The second-guessing indeed lead to additional lists - and also sparked an initative to create a list that focuses on small presses: Dzanc contacted nearly 100 independent publishers, agents, editors, bloggers and reviewers, and based on the feeback, put together: 20 Writers to Watch - An Alternate List

No surprise: like the New Yorker list, this list lead to some debates as to whom should have been included, and which group is missing, and how to compile such a list, and how to feel about it - see comments of the list, and this essay in the Nervous Breakdown: The Lists We Love to Hate: First the New Yorker, Now Dzanc?

editor's note: there is an additional review of "40 under 20" up in the blueprintreview blog, with a different angle: "New Yorker summer fiction issue / 2nd language authors

update, August 2010:
Luna Park featured a series on Race, Class, Gender & Sexuality in Indie Publishing. i contributed an article on gender ratios, and the effects on categorization - it includes this passage on the summer fiction issue:

"Categories influence the viewpoint — I was reminded of this again when The New Yorker launched their fiction issue in June. Instead of just calling it “Summer Reads,” they titled it: “20 under 40.” And that’s exactly what the reviews and discussions then picked up on: instead of focusing on the stories and authors, the focus moved to the age categorization, and the whole topic of “youth” vs” “aging”. What almost went unnoticed was the fact that the issue came in a fine balance of 10 male and 10 female authors, and with more than 30% non-native writers included. That’s another effect of categories: they define the directly accessible statistics."
(link: Tag Poc 50/50, or: the Complexities and Effects of Categorization)
Eingestellt von Dorothee um 7/14/2010