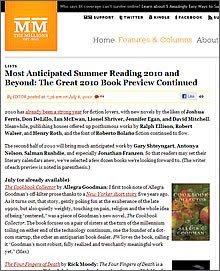 In January, the Millions compiled a superb book list for 2010, a compass for the upcoming months, noting: "At The Millions we’ve put together a “Most Anticipated” releases preview, with blurbs on all the books (well, clearly not all) you should be excited about in the next months. Add your own in the comments."

Now, just in time for July, an updated version of the list went online:
Most Anticipated Summer Reading 2010 and Beyond: The Great 2010 Book Preview Continued

The list is sorted by months, starting with July, which brings: Goodman's The Cookbook Collector, Moody's The Four Fingers of Death, Doerr's Memory Wall, Shteyngart's Super Sad True Love Story, French's Faithful Place, Langer's The Thieves of Manhattan, and 2 books by Bolaño: The Return and The Insufferable Gaucho. And that's just July.

For more reads, check out the initial list from January: "Most Anticipated: The Great 2010 Book Preview" - or visit some darker summer reads, as compiled by Emily St. John Mandel in Five Apocalypses: A Particularly Catastrophic Summer Reading List - including Justin Cronin's The Passage, Nick Harway's The Gone-Away World, McCarthy's The Road and other apocylptic books that probably are best read on a sunny day, while the world looks all bright and cheerful.
Eingestellt von Dorothee um 7/09/2010